Recently, a few people have asked: what are your plans for Potioneer? Well, in order to help be more direct and to help answer that question, I’m writing this post! I originally planned to remain a little more distant with my hopes and dreams for Potioneer’s development because so much can change during the course of any project. I didn’t want to disappoint myself (and all you Potioneers, too) if feature x was late or feature y was never implemented or feature z didn’t live up to its promise.

Rather than simply listing off things I’d like the game to be, I’ll share with you what makes me excited about several of my all-time favourite games, what I’d like to try to capture from each of them, and what gets me to keep coming back online to work on Potioneer.

If you haven’t yet, I’d like to ask you to read the Early Access text that’s part of the Potioneer Steam store page. That includes some goodies specifically around crafting potions. But, of course, there will be much more to Potioneer than that. So, onto the new stuff!

I’ve played a lot of every generation’s games, from Pong to now, and if there’s one thing that really excites me, it’s collecting things to display as trophies. I love the challenge of looking where most players don’t to discover something the game developer, writer, or artist left as a treat. I love collecting that trophy (by buying, finding, “acquiring”) and spending the time to place it in my home in a unique way, to show off to my friends.

EverQuest II has a game element where, every so often, a player would see a shimmering spark on the ground with a telltale “?” floating above it. Collecting this item would add the item to the player’s collection, which could then be sold or sometimes placed into the player’s home. A great website (with a rather unfortunately outdated design) details this feature futher: http://eq2.eqtraders.com/articles/article_page.php?article=q41. 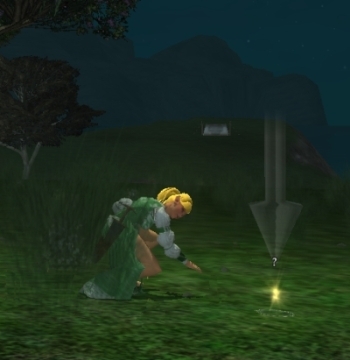 For Potioneer, I intend to capture the essence and some of the gameplay of that feature.

Potioneers might receive erroneous mail, addressed to someone else. Deliver it and potentially get a reward. Or open the box and keep its contents for yourself. Or sell it to a vendor to buy a better trinket they have in their shop.

Perhaps while exploring they’ll come across a note on a ripped page which contains instructions for finding a chest. Or, reading about a given religion to which one NPC belongs might offer clues as to where to find its priceless artifacts or ingredients to craft a potion which helps you attain those artifacts.

The thing that makes this work is successfully creating the feeling like the town of Sundry (and its surrounding area), where Potioneer takes place, is truly alive. In order to achieve this, time must pass as it does in the real world and in Animal Crossing: in real time. The characters and the stories they tell must be expertly written to encourage players to believe that the world continues even when they’re not playing, because it does. There must be a sense of anticipation for players who come back to Potioneer after being at work for the day; the sense that something new will be in the shops, some new plant will be found, some character missing who you have to find, etc. Even more than good stories, however, is that the writing itself must be written in a way to cause the player’s imagination to fill in missing details on their own. In this way, the world becomes theirs.

There’s another Morrowind story I share with people, usually those who have never experienced the game, who ask me about my love for it. My goal in Morrowind was to collect every book off of every shelf. I stole hundreds of books from every shop, house, and temple. One night while I was resting at the inn in Pelagiad, I went out at night to explore the town (read: pilfer) and find more books. In one person’s house, while the person was away, I accidentally picked up a pillow on their bed and discovered a blade laying underneath. It stopped me in my tracks. What was this knife for? Protection? Did the person who owns it feel not safe sleeping at night? The attention to detail blew me away. The NPC who lived in the house was not integral to any quest that I know of. It was a seemingly secondary or tertiary character. The fact that a designer was so articulate when crafting this world that they included such a minute detail to make it just that much more real was astounding to me. I knew that this sort of care must be included in my own game.

Potioneer will have two calendars: one static, where things occur on a set schedule, and one dynamic, where things happen relative to other events in the game. In the most recent development version, I plan to deliver, via in-game post, a Mortar and Pestle to the player on the second day of play.

If you’d like to see what your mailbox at Sundry Lot #11 looks like and what happens when you receive a package, watch this short introduction video.

I still play Animal Crossing on my Gamecube. The game launched over 15 years ago, but I still suspect that not all of the content has been discovered by all of us. Even now it feels like there’s still stuff on the calendar we haven’t seen. Wouldn’t it be amazing if somewhere deep down in the Animal Crossing’s code there is a line spoken by one of the NPCs like “wow you’re still playing this after all these years? Here’s a special tape from KK.”

Still, what good are collectables and trophies when all you’ve got is a desk in a forest?

There is an entire second portion of Potioneer which I haven’t detailed that I’d like to share in the next update. Until then, keep planting and be well.